On hastening the apocalypse 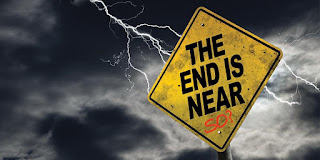 There's a specific subset of Trump voter that interests me greatly.  Not the kind who believes in "make America great again", but the kind that voted for Trump because they wanted societal collapse.

One of them posted on one of my FB posts before the inauguration.  I had made a plea for people not to vote for Trump made because of this article:

One of the people who responded was a fairly religious Jew, who told me to stop posting because it made him uncomfortable about voting for Trump.  I replied that that was my entire intention, and he said that he was voting for Trump not because he would be a good leader but because he was "something that needed to happen".

I actually understood what he meant.

A lot of us have thought for a while that the system (and I include here the government, big businesses, and the media) is hollow at its core.  That is, it's merely a mirage of power, a castle made of sand that could be swept away at any moment.

The idea, I think, was that if we put an angry buffoon in charge, people's eyes would open to how messed up everything is, and we'd demand some real change.

Unfortunately, it doesn't seem to be working out this way.  But hey, things can change quickly, and we'll see what develops.

This was the Jewish variety of Trump end-time promoter.  The Christian variety is actually much scarier to me, because many kinds of Christianity have a period of great suffering as part of their grand story of redemption in the end.  The worse things get, the more convinced that the end is near these people get.

If belief in this story was all there is to it, that would be fine, but some of these people seem to take great pleasure in making things worse, presumably in the conviction that their intervention is helping to bring about an eventual paradise for them.

This seems dangerously misguided, and contrary to a lot of what I know about Christianity, specifically to the Sermon on the Mount.  But these people cherry-pick their religion and focus on hating people who don't believe the same way as them, which, as far as I can tell, is not a biblical principle, but is instead a defense tactic used by those who want to defend a logically or philosophically untenable position.

So we've got an apocalyptic contingent who believe that Trump angering allies and starting pissing matches with other countries is him being a great leader because he's making the world more chaotic and that is just the perfect way to hasten the apocalypse.  Which, again, I don't know if that's biblically accurate, but it's a hell of a way to justify any behavior at all.

If your belief system says that before a really great thing happens, a lot of really shitty things have to happen, you're not going to do anything to stop the really shitty things from happening.  If that means mass suffering, so be it, in your mind (as long as it's other people who are suffering!).

I think that the bible says a whole lot of stuff that contradicts this worldview (again, Sermon on the Mount!).  But religion is as much about marketing as truth, and end-time fantasies sell really well (Left Behind series).  By all means, focus on obscure trivia in the bible that's exciting and ignore the bulk of the moral lessons.

I'm Broken, or I have become comfortably numb

I feel guilty after browsing Facebook just now. Guilty because I posted something jokey while many of my friends are discussing the mass murder at the synagogue in Pittsburgh.

This is what's happened to me: I've become news-phobic and feelings-phobic as a defense mechanism. Last week, with the news of the pipe bombs, my reaction was basically "yeah, that seems like a thing that would happen". And it was the same with the synagogue shooting, if I'm being honest with myself. It's just a numbness, a nihilistic, fuck it all, this place is doomed kind of feeling. I thought it was universal, but some people have told me that they still have hope. I honestly don't know how they do.

It feels to me like we're in a death spiral now, with opposing factions feeding each other memetic ammo. I know that people have called for Trump to denounce white nationalists. I don't know if he has. I'm fairly sure it wouldn't matter one iota if he did, because they…